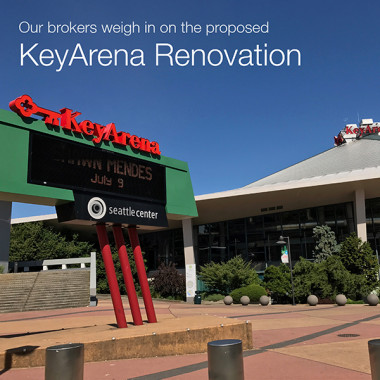 Seattle faces great changes as the plans to renovate KeyArena at Seattle Center to NBA and NHL standards unfold. Earlier in June, Seattle Mayor Ed Murray chose Los Angeles-based Oak View Group (OVG) to do a $564 million privately funded renovation after Seattle Partners Group, the only other bidder withdrew their $521 million proposal. Many Seattleites still mourn the loss of the Supersonics and the arena’s renovation is intensifying conversations about the possibility of a new NBA team in the future, but an NHL team would likely come first. As reported in a KOMO news article, the NHL is interested in the creation of a Seattle hockey team. In fact, Seattle is the #14 media market in the country, and the only market in the top 25 that does not have either an NBA or NHL team.

OVG was ultimately selected partially because of the financing they provided, which, according to CEO Tim Leiweke, is “100% privately financed” (The Seattle Times). Financing aside, the renovation of KeyArena is leading many to question whether the Queen Anne neighborhood surrounding Seattle Center can handle the increased congestion brought on by the arena’s expansion and by the larger events they are planning on holding there. According to the 2016 INRIX Traffic Scoreboard, Seattle is rated as having the #10 worst traffic in the nation. Compared to the rankings of other cities in the Pacific Northwest (Tacoma: #53, Portland: #30, Vancouver B.C.: #76), Seattle is growing at a staggering rate every year, and current infrastructure is already struggling to accommodate commuters on a daily basis. INTRIX even conducted a study examining how events at KeyArena affect traffic in the surrounding area. For example, an Adele concert last July caused additional delays of up to 42 minutes in specific areas. Although city officials in favor of the KeyArena renovation suggest that the opening of the Alaskan Way tunnel may reduce traffic, the results “remain to be seen.” (King5 News).

We sat down with two of our NAI Puget Sound Properties brokers; Rich Mermelstein and Bob Swain, to discuss their thoughts on how the KeyArena redevelopment will impact the market.

In general, Rich does not believe that the KeyArena location would be a good idea due primarily to neighborhood congestion. “It’s a very tough location to get to. Mercer Street is still a mess and will be for years…the majority of the parking stall surface lots have disappeared since the Sonics left to be redeveloped for apartments and other developments.”

Rich represents U-Park, one of the premier parking operators in Seattle, who he said are enthusiastic about the KeyArena expansion: “Their corporate office is a block and a half from KeyArena, and they actually have a lot of parking lots there. It’s been tough on them since the NBA has left.”

Rich believes that the renovation will not necessarily drive additional Commercial Real Estate development in the area. He mentioned that the Queen Anne neighborhood has largely become a dense residential area and that within the next few months a proposed new zoning overlay could be passed, further increasing the residential density. Although Rich believes that KeyArena’s renovation could drive new retail development, he was not optimistic about other commercial development. “Queen Anne is one of the periphery submarkets to downtown Seattle and it hasn’t changed much on supply and demand for office space over the last 20 years.”

Rich did, however, believe that a SODO location would be a more natural fit: “You’ll see a lot more infrastructure going in down there; with services, with potential office space, training facilities…I think it would be a bigger economic boom for development going forward down there.”

Bob Swain, who has a long history working with industrial properties in SODO, was a bit more optimistic about the KeyArena renovation.

“It would be great to reinvigorate [Seattle Center]…It’s been kind of a dead zone since the Sonics left town. Logistically SODO kind of makes more sense, but KeyArena, I think, would be better for the city.”

Bob also emphasized that SODO development is happening with or without a new arena in the works: “SODO has been revitalized and is continuing to be…I don’t think that if we don’t do the stadium down there that it takes away from it.”

As Bob pointed out, many nearby tenants would have likely been happy to have another stadium in SODO, but that is not the case for the entire community. “Certain tenants, like Port-oriented or trucking companies, or clients that are in logistics, they’re not necessarily for a third stadium [in SODO], because traffic is already an issue down by the port.”